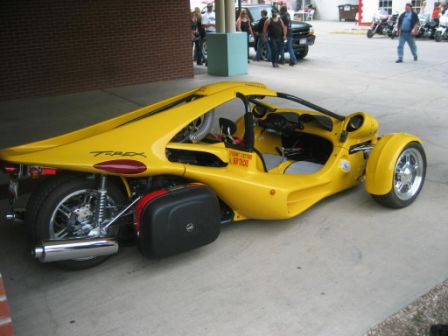 If you need three wheels this could be the bike!

Someone asked the question the other night and it raised a number of interesting thoughts.

One woman suggested that she would like to spend her life with an Italian crotch rocket… sleek and fast hugging her curves tightly.  Perhaps too tightly, I suggested.  How will you keep it satisfied running up and down the same old road?   What happens when it begins to look for a more challenging road or feels there are getting to be too many frost heaves and starts to look for a smother surface?  No, I reflected, I do not think most women would be happy married to crotch rocket, to which an Italian woman added that she thinks they are over-rated. She said they only perform well if you keep them revved high and are quick to shift, which is fun at first, but too much work over the long haul.

A second woman suggested she would want a new Goldwing… you know the one that has enough compartments to carry all her luggage, shoes and a weeks groceries,  yet still out performs that Italian bike?  She said the thought of having the big power plant throbbing as it idles in her driveway excites her.  It should be a red one too, she said, because red is exciting. And she loves the smell of the leather seats, you know the ones that smell like Old Spice and completely sound you.  I wondered if she will she still be happy when the shine fades and becomes hard to keep tuned, leaving it not performing as well and consuming more fuel than anything else in the neighbourhood.  This is hard … think about it… which bike would you choose?

Her husband felt a large motocross machine was the right answer.  He said that big bulky cruisers are too hard to handle.  He likes to be able to get down and dirty, and no matter how deep the ruts, they just want to keep going.  They are also handy to have around the house because they can pack a ton of stuff, don’t consume a lot of fuel and are just fun to be with.

A third woman suggested that she would choose a metric cruiser… She loved the way the wind caressed her hair, the vibration tingling her fingers and toes as the surge of the big power plant throbbing between her legs as it jumps to life with a simple movement of her wrist.  Her husband asked if she would settle for a little Honda with a single small piston with a long stroke and trusting at high RPM. She smiled and they strolled off together, hand-in-hand.

I said I thought the wife, would choose a full dresser… that is me… and I am not speaking about a wimpy, shiny BMW’s, I mean the biggest squarest heaviest bike on the road.  Like me, it too consumes a lot but goes anywhere. It doesn’t pretend to be sleek or fancy yet stands out in a crowd.  It is easy to love even though most women feel it is completely impractical.  Best of all they don’t wear out and will perform for years… at least that is what I choose to believe.

When the wife heard the comment, she laughed and suggested that she might be compelled to choose a scooter.  She doesn’t care that they are small and she likes the idea they are built for one. They are not the fastest and don’t have a very big power plant but they are very efficient, can turn on a dime … they are kinda cute in a funny sort of way.

Me… a scooter… I don’t think so… do you think there is a message there for me?  The thought of it makes my hair hurt.  I am beginning to think this was one of the dumbest questions I have been asked… however no matter what your ride if you are a West Tour’ner, write me at Layton@max-u.com, I will be happy to ride with you.